Coerced sterilization: We do not stand alone 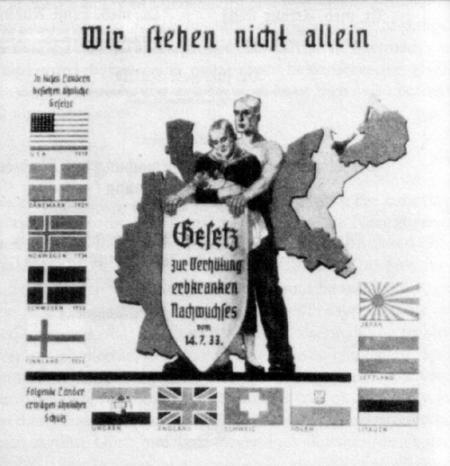 Wir stehen nicht allein: “We do not stand alone”.

This image (mother and nursing child) is a 1936 poster. The woman is holding a baby and the man is holding a shield inscribed with the title of Nazi Germany’s 1933 Law for the Prevention of Hereditarily Diseased Offspring.

This was their compulsory sterilization law.

The couple is in front of a map of Germany, surrounded by the flags of nations which had enacted (to the left) or were considering (bottom and to the right) similar legislation.

The countries which had enacted compulsory sterilization laws were:

The countries where were considering compulsory sterilization laws were:

Social proof is a very powerful persuasion technique. It tries to influence opinions by having the uncommitted view the proposal (or law in this case) as common internationally, modern and progressive.

Social proofs act on the individual by having them want to “fit in” with those they perceive as more knowledgeable. It triggers competition between “us” and “them”.

This entry was posted on Tuesday, November 25th, 2008 at 9:19 am and is filed under Confusion & Deceit. You can follow any responses to this entry through the RSS 2.0 feed. You can leave a response, or trackback from your own site.