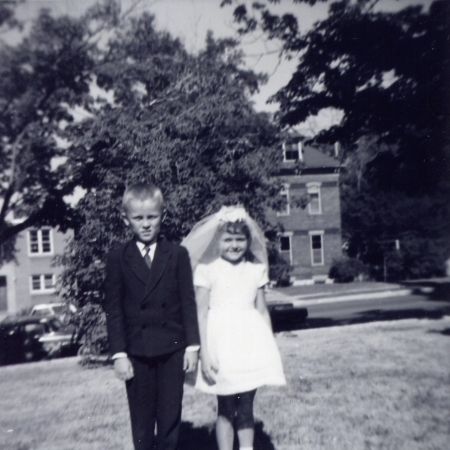 Imagine yourself as a senior partner in a regional, ultra-conservative law firm.

You employ an associate attorney who does the following over her BlackBerry:

Gives an opinion (in writing no less) about a contract that (1) she hadn’t seen, (2) by unsecured email to (3) to someone she has never met while (4) relying solely on known-biased sources while (5) proclaiming on her website and weblog an expertise in the complexities of franchise law to over 200 clients ; and does this all  while not (6) charging anyone?

Organizational affiliations aside, you decide if you think she’s partner material.

I don’t know what I’d do if I were the Managing Partner. Probably get her to bill someone…

What I do know is that Cheryl and I had a bright future ahead of us as we squinted into my Mom’s Brownie at our First Communion. That’s right: just front of the second St. Mary’s Church, Barrie on Mulcaster Street…you know the spot: right across from the Sisters of St. Joseph’s Mother House.

Add On: The building in the background, I bet, still rings with the shouts of my 1972  Grade 9 classmates when an non-descript grinder named Paul Henderson saved a nation’s pride on a frozen pond in the greatest hockey game ever played. To meet a man of that humility, strength and grace that would have been great. But to re-emerge from a 10 year ordeal, with your dignity intact with Terry (25 years this June 7th) that I could have gotten behind.

Mr. and Mrs. Henderson invite you and your partners to join them tomorrow to celebrate marriage, faith,  hope and friendship in support of the David Busby Street Centre.

Tickets to eat while seeing Paul speak tomorrow, too late for caterer, I’d imagine. But I think they’d sell some standing-room-only space to you to listen to a very important message.

But why not call the United Way of Greater Simcoe County or just drop by or pledge a few bucks for a great cause at Tanglewood Golf Course on Friday after 6 pm.? I know I did.

With your help, I know we’re going to Move the Busby to new Digs by the end of the year.

Think of it as an investment in your marriage that I bet will be repaid many times over. ;}

This entry was posted on Wednesday, April 22nd, 2009 at 11:45 pm and is filed under Fixer, Lawyers as businesspeople. You can follow any responses to this entry through the RSS 2.0 feed. You can leave a response, or trackback from your own site.