Salad Creations Canada: Is this McSalad bar an unintentional FranWhack? 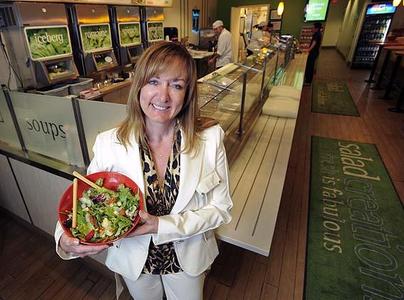 Some imported franchise systems are designed to fail: to make the CDN franchisor and all franchisees’ life savings evaporate.

The U.S. franchisor comes in, terminates the much smaller CDN licensee and takes over the “x out of 50” stores that were promised under contract.

This is how nice northern families can  end up as cannon fodder.

They blow their brains (and cash) trying to grow under impossible contract terms, the big boys then come in and scoop up what they want. Been done a thousand times in the past in franchising…

To a potential franchisee, it is irrelevant if the national developer/franchisor is:

Since I have tremendous respect for the Toronto Star business journalists, I suspect #2 and not #1.

Lisa Wright interviews Brenda Bot, the franchisor in a story on the front page of the Business Section: Romaine Empire: Green through and through, Salad Creations aims to grow into nation’s Subway of salads.

What I do see is a sincere person who naively believes that you can franchise any business concept and do it profitably for themselves and others. That a single one of a 5,000 Tim Hortons costs way over a million $ to build: yet Ms. Bot thinks she can launch a national chain for less than that?

I also see (and this gives me zero joy to type)  is another in a long line of U.S. born, CDN imported “FranWhack” franchise investment scams: hype masquerading as a business.

This concept was previously reviewed by me and I am of the opinion that, like Dagwood Sandwiches, Cereality and SoupMan, this should be considered a FranWhack franchise offering – one that will take every franchise investor down to bankruptcy.

I suggest reviewing what is and is not a FranWhack franchise investment on his website, FranchiseRemedies.com.

Get Smart and call Richard in Texas for yourself and ask him if Salad Creations sounds like a FranWhack. He won’t fill your head full with a bunch of phantom dreams as Toronto-based Michael Webster (The Psychology of Scams) so clearly defines.

Don’t gamble with a Walter Mitty-esque longing to Be your own Boss, or Be in business for yourself not by yourself. You will never have fewer alternatives as when you are in a franchior:franchisee relationship.

You and your spouse’s life savings may live to thank you.

Ms. Bot draws the analogy between Salad Creations and Subway. This seems to be a twist on the hackneyed “next McDonald’s” huckster mantra so popular a few years ago. For franchise investors, Subway may leave a bitter taste because that system has had a singular reputation among industry experts.

Folks interested in corporate history as a predictor of future behaviour, might want to check WikidFranchise’s article archive: Subway tradename or maybe a few of the following direct references:

I wish Mr. & Mrs. Bot the very best in this new industry but that sentiment stops cold dead if it requires their their investors lose their life savings. They are green (green as grass?), as the headline editor wryly implies. They have a problem (eg. too much money) and their new best friends (lawyers, consultants, association, banks, etc) will help them overcome.

I’ll just add this article to WikiFranchise.org and check back in a few years to see how this newly minted CFA member and investors are doing.

I don’t do pre-sale due diligence consulting so I would defer to professionals like Solomon and Webster for those answers.

Someone in the family should call me so I can explain how the CDN Krispy Kreme development deal went down. No charge to anyone calling as I have zero franchisor consulting clients, ever.

This entry was posted on Monday, July 27th, 2009 at 4:27 pm and is filed under Opportunism, WikiFranchise.org. You can follow any responses to this entry through the RSS 2.0 feed. You can leave a response, or trackback from your own site.

6 Responses to Salad Creations Canada: Is this McSalad bar an unintentional FranWhack?