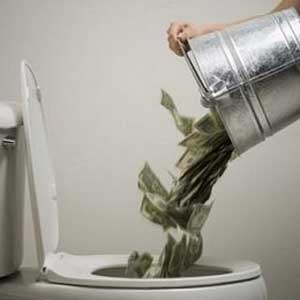 The revenue paid to Industry Canada was supposed to cover the default claims paid out, but the math has never worked in Ottawa’s favour.

Claims paid out have risen steadily over the decade, and now top $100 million annually, while revenues have consistently lagged, costing taxpayers a net $335 million so far.

Put another way, cost recovery is currently at only about 60 per cent rather than the 100 per cent that was planned, and is in steady decline.

“The gap between claims and fee revenues will continue to exist and most likely expand,” predicts the KPMG report, dated Oct. 30 and obtained by The Canadian Press under the Access to Information Act.

The program’s portfolio of loans has become ever more risky over the decade, now catering especially to newly established small firms with weak credit scores and little collateral, many in the food-and-beverage sector.

These loans are used extensively in franchising although the franchise bankers frequently don’t even bother to try to register or make a claim on the phantom loans. The difference between new and used equipment nicely covers the money split between the mob (see here for details).

I’d be happy to send anyone the spreadsheet.

The U.S. Small Business Administration’s 7a. loan program seems to be sticking their citizens with a $70-83-billion public debt, too.

This entry was posted on Monday, January 4th, 2010 at 5:32 pm and is filed under Bankers, Opportunism, Predatory franchise lending, SME Loan guarantee programs. You can follow any responses to this entry through the RSS 2.0 feed. You can leave a response, or trackback from your own site.