Is Toyota being seen as the new Ford Pinto?

Without an attempt to remember history, man remains a very stupid animal (1970 ad). 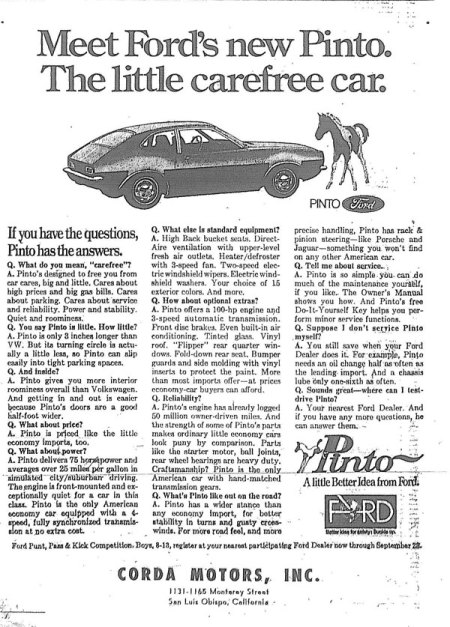 This is a Wikipedia post outlines the Ford Pinto safety controversy:

The model became a focus of a major scandal when it was alleged that the car’s design allowed its fuel tank to be easily damaged in the event of a rear-end collision which sometimes resulted in deadly fires and explosions. Critics argued that the vehicle’s lack of a true rear bumper as well as any reinforcing structure between the rear panel and the tank meant that in certain collisions, the tank would be thrust forward into the differential, which had a number of protruding bolts that could puncture the tank. This, and the fact that the doors could potentially jam during an accident (due to poor reinforcement) allegedly made the car less safe than its contemporaries.

I guess this 1977 Mother Jones article seemed to have been influential: Pinto Madness.

For seven years the Ford Motor Company sold cars in which it knew hundreds of people would needlessly burn to death.

I brought into our family our 4th Civic last month.

This entry was posted on Saturday, February 13th, 2010 at 10:23 pm and is filed under A Confidence Game, Advertising/Franchising science, Unsafe at any Brand. You can follow any responses to this entry through the RSS 2.0 feed. You can leave a response, or trackback from your own site.

One Response to Is Toyota being seen as the new Ford Pinto?