How efficient and effective are the best franchisors in using their franchisees’ store investments?

Of the investment resources they attract, do they use them effectively or are they squandered? 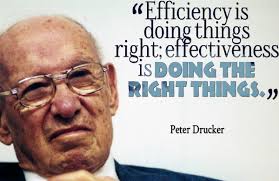 I chose some of the more “blue chip” of the U.S.-based systems and chased down their 2013 FDD (thank you the state of Wisconsin).

Opportunism is when someone in a position of advantage, uses that position against another. In franchising, the situation that the franchisor controls the store’s sunk cost investment, can be exploited. A very good test of opportunism is: If the ownership of the assets were reversed, would the alleged “opportunist” likely change their decision?

While the 5 systems grew by 4,342 new stores (adding +$6-billion to franchisors’ coffers), there was also a loss of 1,738 stores or $2.5-billion of franchisee store investment that left the industry. 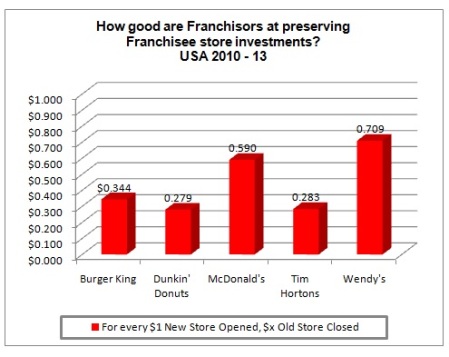 Measured from the best practice level of Dunkin’ Donuts, there is some very large variation in these systems as they purport to take care of “other people’s money”.

Losing over 40% of the invested capital in 4 years? It seems the franchise industry is a bit of a leaky bucket.

Kudos to the states of California, Wisconsin, Minnesota, Washington, and soon-to-be New York for their online repository of franchise disclosure documents.

This entry was posted on Wednesday, February 25th, 2015 at 12:51 pm and is filed under Opportunism. You can follow any responses to this entry through the RSS 2.0 feed. You can leave a response, or trackback from your own site.