Franchise freedom of speech and association in Canada, circa 2004.

Two pages of a Record of Motion filed in the Ontario Superior Court of Justice by Michael Shell and Drazen Bulat on behalf of their client, Tupperware Canada Inc. on September 23, 2004. 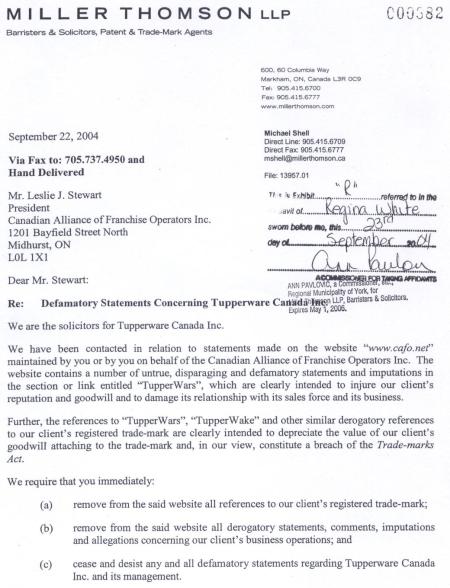 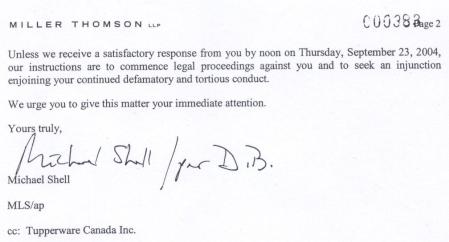 I voluntarily closed down the “TupperWars” section of CAFO‘s website in response to this challenge (see context). This happened days after we (for the first time) sent out a series of emails to U.S. franchisees/distributors.

We received zero requests to stop the emails from franchise investors.

I founded the Canadian Alliance of Franchise Operators, CAFO in 1998 and killed it off in September 2005. I used to run a website called cafo.net, too.

I still own the logo [left], the trademark and copyright.

Anyone that would like to use it, by all means, copy and reproduce as much as you want. You may choose to use it selectively but please report back as to its effects.

I stopped CAFO when it became apparent that it was being used to give false sense of a franchise investor voice. I’d rather be silent that feed into the misrepresentations, half-truths and silent lies. And these were from the people that claimed to be on the franchisee side [wolf in sheeps’ clothing lawyers].

Clever marketing. Useful for some time, I suppose.

Take a listen to St. Leonard of Montreal: Everyone Knows