How to drive the franchising elite insane

1:40 – the end comes quickly as he foot solders of the elite look the other way, the elite are defenseless

Start occupying your own franchise system

Only talk to an attorney you have a legal relationship to. 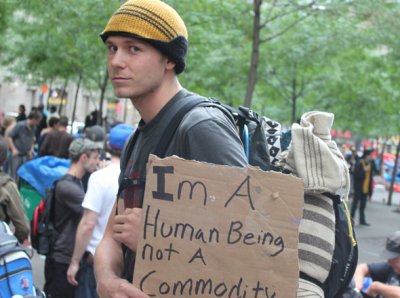 We know there are undercover cops in the crowd. I think I was talking to one last night, but it’s like, what are you trying to accomplish? We don’t have any secrets.”

“The undercover cops are the only ones who ask, ‘Who’s the leader?’ ” she said. “Presumably, if they know who our leaders are they can take them out. The fact is we have no leader. There’s no leader, so there’s nothing they can do.

— Chris Hedges, Why the Elites are in Trouble

Throw Out the Moneychangers:  an act of civil disobedience in New York city his week

Here is the video for the full speech.

Here is the text of the speech.

Michael Moore and the low cost of killing a U.S. federal judge

Chris Hedges is right: Moore is a more progressive force than the entire Democratic party.

Lots of guns in Canada: So few killings.

Where does the fear come from?

This ad invokes it all: total magical thinking.

Those gullible enough not to be repulsed will nibble.

Addictive qualities | Tagged: Chris Hedges, Empire of Illusion: The End of Literacy and the Triumph of Spectacle |

Gaza as a metaphor for the franchise industry

…war looks and feels like love. But unlike love it gives nothing in return but an ever-deepening dependence, like all narcotics, on the road to self-destruction. It does not affirm but places upon us greater and greater demands. it destroys the outside world until it is hard ot live outside war’s grip. It takes a higher and higher dose to achieve any thrill. Finally, one ingests wareonly to remain numb. The world outside war becomes, as Freud wrote, “uncanny.” The familiar becomes strangely unfamiliar – many who have been in war find this when they return home. The world we once understood and longed to return to stands before us as alien, strange, and beyond our grasp. p. 163

When the mask of war slips away and the rot and corruption is exposed, when the addiction turns sour and rank, when the myth is exposed as a fraud, we feel soiled and spent. It is then that we sink into despair, a despair that can lead us to welcome death. This despair is more common than many expect.

In the 1973 Arab-Israeli war, almost a third of all Israeli causalities were due to psychiatric causes, and the war lasted only a few weeks. A World War II study determined that after sixty days of continuous combat, 98 percent of all surviving soldiers will have become psychiatric casualties. They found that a common trait among the 2 percent who were able to endure sustained combat was a predispostion toward “aggressive psychopathic personalities.” p. 164

— War Is a Force That Gives Us Meaning, Chris Hedges

The rush of battle is a potent and often lethal addiction, for war is a drug

I have seen many franchise wars in +30 years.

Chris Hedges who has been involved with international industrial violence for over 20 years.

…I have seen too much of violent death. I have tasted too much of my own fear. I have painful memories that lie buried and untouched most of the time. It is never easy when they surface.

I learned early on that war forms its own culture. The rush of battle is a potent and often lethal addiction, for war is a drug, one I ingested for many years. It is peddled by mythmakers – historians, war correspondents, filmmakers, novelists, and the state – all of whom endow it with qualities it often does possess: excitement, exoticism, power and chances to rise above our small stations in life, and a bizarre and fantastic universe that has a grotesque and dark beauty. It dominates culture, distorts memory, corrupts language, and infects everything around it, even humor, which become preoccupied with the grim perversities of smut and death. Fundamental questions about the meaning, or meaninglessness, of our place on the planet are laid bare when we watch those around us sink to the lowest depths. War exposes the capacity for evil that lurks not far below the surface within all of us. And this is whey for many war is so hard to discuss once it is over.

The enduring attraction of war is this: Even with its destruction and carnage it can give us what we long for in life. it can give us purpose, meaning, a reason for living… p. 3

…the lie in war is almost always the lie of omission. p. 21

— War Is a Force That Gives Us Meaning, Hedges, as columnist at Truthdig.com

Franchising: A second-rate Horatio Alger myth. Buy your copy at an independent bookstore.

Lecture recorded for TVO’s Big Ideas (click here). Was there, took the picture: Brilliant!! Fill your boots and head with Truthdig.

Franchising is in the entrepreneur illusion business

Chris Hedges gets it right.

In essence, what we’re trying to do is to borrow our way back to a bubble economy of 2006.

And the danger with that, and this is just across popular culture, is that we think if we just dig deeper within ourselves, If we just find the inner strength and fortitude, If you grasp that you are truly exceptional…

…you can have everything you want.

The title caught my eye.

Is franchising an empire built on brand-induced self-delusion?

If it is, then it appears to be just one in our post-modern world where any means justify the economic ends. So says a Pulitzer Prize winner, anyway.

The first chapter (The Illusion of Literacy) starts off with a bang. A quote from one of my favourite thinkers, John Ralston Saul that I’ve mentioned before (1., 2., 3., & 4.).

I especially like his contrary opinions about expertise: see Experts? We don’t need no stinkin’ professionals. Franchise law is an example of the hollowed-out perfection of the expert literate man.

Hedges lifts this quote from Saul’s 1992 book, Voltaire’s Bastards: The Dictatorship of Reason in the West:

Now the death of God combined with the perfection of the image has brought us to a whole new state of expectation. We are the image. We are the viewer and the viewed. There is no other distracting presence. And that image has all the Godly powers. It kills at will. Kills effortlessly. Kills beautifully. It dispenses morality. Judges endlessly. The electronic image is man as God and the ritual involved leads us not to a mysterious Holy Trinity but back to ourselves. In the absence of a clear understanding that we are now the only source, these images cannot help but return to the expression of magic and fear proper to idolatrous societies. This in turn facilitates the use of the electronic image as propaganda by whoever can control some part of it.

Again: …the use of the electronic image as propaganda by whoever can control some part of it.

Case in Point: A new television show named How’d You Get So Rich? features, of all players in this drama, a franchisee attorney (YouTube). This “news” is then picked up the industry-financed social media apologists, not just once, but twice.

Nothing says sincere, honest and authentic in both a visual and journalist sense, as the two words together: Joan Rivers. Celebrity spokespeople have been used in franchising brand management for a long time but sometimes it’s a double-edged sword.

Is this a too cynical interpretation of this type of modern myth-making?

I wonder what the majority of mom-and-pop franchise investors would like to say to Mr. Zarco? Is he their champion of the underdog? Does his story reflect this people’s:

An inspiring story on a marketing and franchising level.

And personally, to me anyways.