Because he knows white-collar laws are a farce. 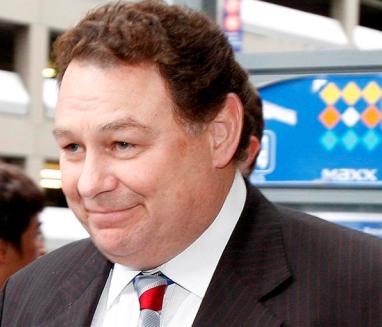 Under Kiwi law, there is insufficient evidence for the Serious Fraud Office, SFO to press criminal charges although 3,000 New Zealanders have lost $80 million of their life savings via the Blue Chip franchise system.

Bryers was sentenced in May for over 1oo commercial offenses for which he pleaded guilty. The sentence?: 75 hours of community work and a $37,500 fine. (Blue Chip boss sentenced – but avoids jail)

Not too surprising when governments treat a law enforcement agency as a political sacrificial lamb.

Nothing complicated – don’t even tell anyone its buyer beware and then keep the location of the mass grave a secret. Economic efficiency and the grace to not worry people before its time to send them to that other place. Bewdiful …

What Mark Bryers did was substantially the same as every franchise system does frequently/sometimes/selectively does. Bryers ambition was larger and his time frame was shorter. That’s the only difference.

I quote Ray because Bryers is now Australia’s responsibility.

Please find the current Special Report on Franchising. I am quoted in the article Is It Time to Buy a buy Franchise?

“If any promise is made, you should have it in writing, and if you put it in writing and it isn’t included in a franchise agreement, you should assume you are dealing with a liar and a scoundrel,” says Stewart.

But he suggests that a majority of the new offerings being marketed are “non-sustainable,” and that the number is greater than in the past.

“These fly-by-night systems come in to the market because people allow them. They buy them and they think it’s just like McDonald’s.”

There is also a slideshow called Franchising Experts Weigh In. I’m the last guy [far right] with the red face on holiday.

“If you really have no experience in an industry, like collecting dog poop, then you should work there [first]. You need to understand what that potential franchisee is going through.”