The True Evil of Gag Orders 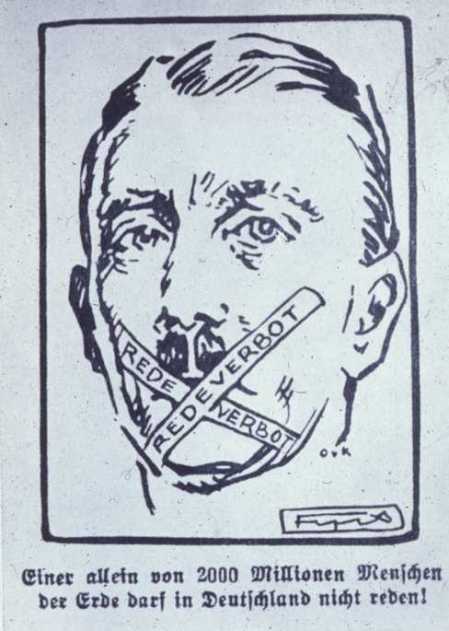 This poster reflects the fact that for a period in the 1920’s, Hitler was forbidden to address public meetings in much of Germany.

The artist is Philipp Rupprecht who is best known for his cartoons Julius Streicher and Der Stürmer (“The Attacker”).

Gag orders are powerful but not for the way most people think.

1. The conventional wisdom is that confidentiality agreements act to stop the flow of information (negative stories) coming back to the market. Usually, information flows reward good operators or franchisors and punish opportunistic franchisors (people are unwilling to invest in their systems.

This is part of their function but they are much more useful than just that.

2. Gag orders are a sophisticated form of mind control that taps into exiting franchisees’ guilt and internal conflicts. The gag order is only the symbol of a franchisee’s betray of another person, another family.

Franchising sets up a Bargain with the Devil that is disguised within an economic model.

As an exiting franchisee from a deadbeat investment, you know anyone that buys the store from you will lose their life savings. You also know (at least on some level) that by agreeing to the “deal” you are becoming complicit with the franchisor: the very party who has basically ruined your family and future.

You are maneuvered into believing that the “best of the worst” alternatives is to screw another unknown future franchisee to the wall.

Allegorically throwing anyone in front of an approaching train in order to save yourself, has some deep psychological and spiritual consequences. When you conspire into luring someone else into slavery and a life of pain, you not only join in the franchisor’s culpability…but

This internal guilt or cognitive dissonance (two contradictory ideas at once: “I hate my franchisor for lying to me” but “I lied to escape”) is what keeps former franchisees sick, inactive and silent. You have created an internal conflict that is next-to-impossible to reconcile. It’s called being eaten alive and creating yourself as your own worst enemy. I know this very well as someone who has never signed a gag order.

Scribbling your name on a document means next to nothing.

This entry was posted on Tuesday, November 25th, 2008 at 12:08 pm and is filed under Outlaw gagging investors. You can follow any responses to this entry through the RSS 2.0 feed. You can leave a response, or trackback from your own site.

One Response to The True Evil of Gag Orders