Paranoid franchise curmudgeon: If we all play our parts… 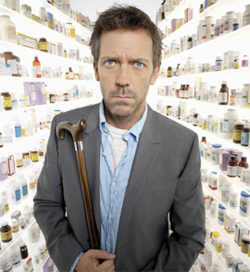 * paranoia: a thought process characterized by excessive anxiety or fear, often to the point of irrationality and delusion. Wikipedia

* curmudgeon n. a miser or an ill-tempered (and frequently old) person full of stubborn ideas or opinions. Wikipedia

Dr. Greg House a role played by an actor, called Hugh Laurie. He also fooled around in Blackadder.

A paranoid is someone who knows a little of what’s going on. William S. Burroughs

I am a kind of paranoiac in reverse. I suspect people of plotting to make me happy.  J. D. Salinger

If the national mental illness of the United States is megalomania, that of Canada is paranoid schizophrenia. Margaret Atwood

Terry’s right: I better start reading some more non-fiction and put Innis away for a while.

This entry was posted on Thursday, August 13th, 2009 at 8:26 am and is filed under going Independent, Inner work, Writers. You can follow any responses to this entry through the RSS 2.0 feed. You can leave a response, or trackback from your own site.